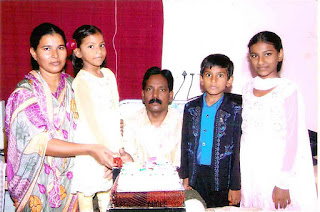 Urgent Prayer need for church in Tribal area of India

Pastor Daniel and Tara Vattiprolu (r) lead 25 churches among tribal people in central India. This letter was received on Oct 28th. The tribal people are illiterate and are into witchcraft. The lower picture is a tribal man who is made literate and the trained in the scriptures and sent to evangelize a tribal village.


Greetings in the most precious name of our Lord and Savior Jesus Christ.

Here one of our pastors W. Pethuru had faced a terrible situation at Durda Padu Village.

He started a branch church at Durdapadu and moved there along with his family. A man belongs to the same village trapped the daughter of Pethuru. She is 14 years old  and the man took her to his home and raped her.

Then the villagers isolated all of our believers and came to believer's houses and threw out the water vessels from their houses. Believers suffered without drinking water for 2 days along with their children. Then all of us went to their village to solve the problem. The believers want to leave the village because of the villagers torturing.

Yours in Christ,
Tara Vattiprolu

P. S.  Nearly 20 families are there to be provided shelter. Now they are homeless and helpless.


Critical Need:    Kindly pray for wisdom,  and for them to get shelter in a safe place. 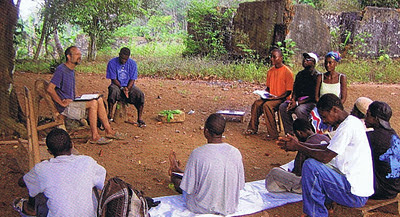 We have added Wordsower / Liberia to those who we desire to strengthen and support. Kim Smith is a man of God who has paid a high price to serve the poor in Liberia. He has chosen to live with those he serves in very humble quarters and circumstances.
Picture is of Kim Smith sharing God’s Word in humble circumstances

Brother Jason Nightingale visited Liberia last month and shared with us a report on this field:
Liberia: 3,500,000 people, 90 % unemployment, people live on .50 cents a day
Ministry: They have planted 115 churches 12 men serve as church planters/evangelist
Pray as Homeless Rescue Services increases our commitment toward the ministry of church planting to this part of Africa.
Kim Smith and team have planted 115 churches, and distributed 25,000 New Testaments in Liberia. He lives as a labor of love among the poor he serves.
# posted by HRSIblog @ 1:27 PM 0 comments